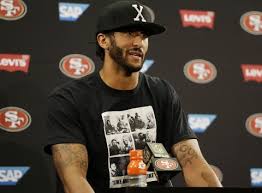 I asked my Cuban-born cab driver how he felt about Castro dying
He said, “I don’t care that he died.”
I asked him if he thought things would be different in Cuba
He said, “No way – the people ruling are too hungry for power.”
I asked him about Colin Kaepernick.
He said, “Who?”
I told him the NFL quarterback who supports Castro.

He still didn’t know about him so I told him about Kaepernick and he had this perfect response.
“The great thing about America is that you can think whatever you want and it is ok.  I couldn’t do that in Cuba.  But I think this quarterback is a great fool and doesn’t know what he is talking about.”
Made my day!

This is a text widget, which allows you to add text or HTML to your sidebar. You can use them to display text, links, images, HTML, or a combination of these. Edit them in the Widget section of the Customizer.